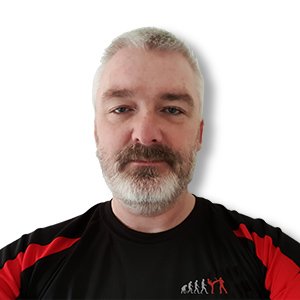 Fighting- & Selfdefense Skills:I have only practiced Krav Maga but I am looking forward to adding to my skill set now that I have joined Kravolution.

I have been training as a student and Instructor for nearly a decade. I gained G1status in Israel and a couple of years later I decided to become an instructor and sat and passed the CIC in Nottingham. Afterwards I quickly gained the kids qualification and finally the Women only course giving me Lead Instructor status in Scotland. I was very proud to be nominated Scottish Director and presided over the biggest and moat successful grading and seminar ever held in Scotland – which also resulted in a country record number of passes for students in their respective grades.I started training Krav Maga when my twin daughters were born and realised that I had no real means of protecting them from the threats that life can throw at them so I decided to try out a couple of systems including Karate, Judo etc but quickly realised that this wasn’t what I was looking for. I was looking for something to apply to real life scenarios and real life attacks. That’s when I found Krav Maga and I instantly knew I had found exactly what I was looking for.