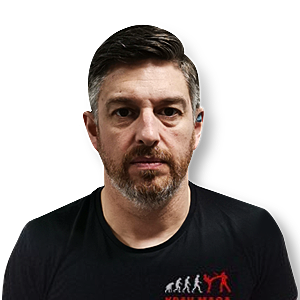 I began training in krav Maga in 2010. I’d heard great things about it and after being involved in combat sports I thought it would be a natural progression. As things are in this day and age I really wanted to study more in depth into defences against armed and / or multiple assailants. With no rules in the real world and no one coming to help it is vital that people learn to be able to protect themselves and those they love. Krav Maga as a raw combative form allowed me to start doing this. It provides a great set of hard skills when if used with the correct mindset is more than capable of making anyone competent in self protection and having a fighting chance to survive violence. Having pushed myself through the practitioner curriculum I attained my p5 in 2016. I wanted to go further and set my mind to becoming an instructor so that in turn could help the next generation of students gain those vital skills that I had been given. Cic pushed me to my physical and mental limits and i passed the instructor course in 2017. Krav Maga improved my situational awareness and my reaction times immensely. Important skills to have in the real world.